In June 2014, Lea Simpson accompanied me on a three day walk between Bathurst and Hill End. Von Hügel did not venture this far beyond Bathurst, it nevertheless falls into the class of VH re-enactments. Rather than turning to 'exactly where' he walked 200 years previously, we set foot in places which perhaps conform more closely to the road quality and terrain he would have experienced (and complained about) in the early 1830's.

The walk was a key aspect of my residency at Haefliger's Cottage in Hill End. The artist Jean Bellette bequeathed her house to Parks NSW on condition they run it as an artist residence program. Bathurst Regional Art Gallery manage this wonderful program.

Quotes in Arial are from the Conservation Management Plan, The Bridle Track
Barbara Hickson, Robin McLachlan and the Bathurst Regional Council, May 2009.

'According to several local historians, notably Brian and Harry Hodge, the original Bridle Track was developed in the 1830s-40s as an access track used by pastoralists settled in the Bathurst area to reach their grazing holdings on the Tambaroora tableland. The country traversed by the track would have been well known to the Wiradjuri people, the indigenous occupants. It is possible that Wiradjuri guides may have assisted the pastoralists in finding this trail to the tableland, particularly the final leg from the Turon up to the tableland via Hawkins Hill.' (p. 13)

Express post parcel of non-essential walking items on its way to Stawell St and now I am sitting on the train with Lea, a large hot breakfast demolished – Frittata, toast, bacon and tomato.
Out the window there are cliffs, acacia blossom, bone seed and scrub.

In Bathurst we walked to Helen and Ray’s place. They run an ecological consulting business, and were interested enough in my project to offer us a lift out to the start of the Bridle Track. Ray said if we were lucky we might see a local species named after Von Hügel, Gompholobium Hugelii (pale wedge pea). We kept our eye out, but never spotted one of these rather uncommon plants.

We walked up and down rises and hills, and celebrated when we came to the end of the bitumen. At Cummings Oakey Creek we stopped for a cuppa and consulted our map to see if we needed to collect water. We decided we’d make it back to the Macquarie River before running low, and sure enough we re-stocked at Bruin Reserve.


We can hear lots of frogs as we go along. Our walking is punctuated by what we might eat next, this is often determined by weight, we are keen to lighten our load— we have brought enough nuts for a family of four for a week.

It seemed to rain most of the night, our campsite, on a rise just above Howard’s Bridge, was well above the road. Lea and I agreed it was vital to be positioned where there was no chance of being in the path of a veering car. Despite this, each time a car passed we turned off our head torches, our potential vulnerability making us desire invisibility. Our attempts at being incognito had clearly failed, when next morning, back on track, a very nice farmer stopped to ask if it was us on the hill overnight, and if so HOW DID WE GO in the weather? He said he often checks back later when he sees a campfire, but decided we must be serious, so didn’t bother.

Lea and I were pleased to be thought of as serious – we are serious! Von Hügel waited two weeks for the rain to stop before venturing forth into the Bathurst weather; it’s difficult to collect and dry specimens in the rain.

Yesterday we walked through farmland mostly. The road verges seemed full of local plants: Hardenbergia (named by Von Hugel after his sister, Countess Franziska von Hardenberg), daisies, yellow buttons, clematis. But today, as we press further towards the Macquarie River the weeds along the verges seem more prevalent. Prickly pear, other cacti, boneseed, thistles and so on.
The She-oaks (Casuarina cunninghamiana) were stunning. Big stands all the way along the river. The Macquarie flowed majestically, at times riffling over rocks.

'This morning, as soon as the sun had warmed the air somewhat, I set out on an excursion via Mount Pleasant, or rather in this direction, and so as not to lose my way I took one of Mr Piper's servants with me... Had I had a saddle-horse instead of my gig, I would have been sorely tempted to visit Wellington Valley, but I realised that it was impossible to do it with a vehicle in as short a time as I would have liked. This taught me a lesson for the future, namely not to believe any more in good roads in the colony. I reached the top of the rise in front of me and a few beyond without much trouble, but I found neither a single new plant nor a view—open forest in all directions, many similar species of eucalypts and the same as far as the eye could see.

The Bridle Track is a mix of farmland, private residences and Crown Land. All along the river the track meanders, in between beautiful stands of Casuarina Cunninhaminan’s, Black Box (we thought), many types of wattle and of course so much more. There appears to be less wild flowers here, and a greater variety of weeds.

There were lots of cars today. Working cars on their way to somewhere. One farmer went by with a whole trailer full of sheep dogs. The smoking cigar or perhaps cigarillo secured between his lips barely moved to acknowledge us, less overtly friendly than the farmer in the morning with the joyously friendly dog or the elderly couple on their way to town (Dusty Rose lippy according to Lea’s expert eye). The couple urged us to be careful at Monaghan’s Bluff and suggested there were a few farms down there who could help us out if necessary. They also told us their property was exactly halfway between Bathurst and Hill End, which meant we had not yet walked half of our walk, despite being ‘half-way’.

Walking with a tent, food and full pack has a grind to it that is absent when walking with a daypack. The need to bend forward slightly when negotiating an incline, balanced against the weight of the pack places a certain strain on the hips, which is not ideal. But the scenery and the occasional break in the clouds allowing the sun to pour through meant discomfort was fleeting.

Along the bluff the road is blocked in various places. Impossible for a car, mad for a motorbike, and on foot, not for those who suffer vertigo. Lea and I kept to the upper side of the road, avoiding the edge except to peer, hesitantly, at the car wrecks at the bottom of the valley. The actual site of the landslide/roadblock, is dramatic, and we picked our way through carefully.

Passing spots along the track were barely wide enough for a mountain bike. The thought of having to back-up a 4 wheeled vehicle, for even a couple of metres still makes my flesh creep.

Several kilometres after the Bluff we came to our campsite. Arriving before 4pm gave us a good hour of daylight to set-up camp. We had lucked upon a site with a still smouldering fire. The tent pitched and still dripping from last night’s rain was soon dry after a good wipe down and a bit of a breeze.
The fire was lovely, and we cooked our horrible rehydrated (but lightweight) dinner. Almost as soon as dinner was over, and we had sat with books and head-torches, than the rain began again. Once again we retreated early to bed.

The walk is over now, Lea has been whisked away in Lino’s van, back towards Sydney and her family.

We never found Gompholobium Hugelii, although we looked. And we also never found the peach tree described in the Bathurst Council’s history of the Bridle Track. I found out later that we would have had to descend to the river, away from the track to find the Peach tree…. Next time, and perhaps in summer when it might be bearing fruit.

We talked a lot as we walked, but also soaked up the landscape and its detail through our footfalls, our skin, ears and eyes. It felt intrepid to be out of mobile (and satellite) phone range, the safety net we depend upon in the 21st century makes it hard to imagine the 1870’s when settlers and perhaps convicts began to forge a short cut between Bathurst and Hill End, probably following and overriding the path of indigenous footsteps and throughways traced over hundreds of generations. And, more recently, the depression workers between the wars, who shored up the Track, working at the painstakingly slow rate of ‘one yard per man per week’. (p. 40)

We saw many kangaroos, less wallabies and simply hundreds of goats. On the second night a goat bleated half the night, alone on the hill face above our camp. Lea was convinced it was injured and had been left by its fellow goats, who had perhaps returned a few times in an attempt to lure it back amongst them. The goats seemed so big and sturdy and out of place, not once did we see a goat road kill.

The rocks, gullies and precipices astounded us as we walked. How would the direction of a path so high above the river have been determined? It is hard to imagine there was even a ledge before the road.

The Bathurst Conservation Management Plan describes the Turon/Macquarie confluence as a significant meeting place of local indigenous peoples—the Aboriginals of Hill End belonged linguistically to the Bularidee tribe. (p.95) Atop a cliff we overlooked this meeting of the rivers. It was beautiful and peaceful, and a long way down.

We carried too much food, and unlike Von Hugel had no pack horse or unnamed servants carrying our stuff. Perhaps he carried his own botanising box. I carried my camera in my hands each day. I took 3 rolls of 35mm coloured film. The last few kilometres up Hawkin’s Hill I put my camera in my pack. It was strangely liberating to finally have my hands free and empty by my sides. The gentle action, back and forth, allowed my back to relax and for me to move more smoothly up the final and steepest incline. As we made our final climb into Hill End we were warmed by the effort of the hill, but from time to time a break in the hill forced freezing gusts of wind across our path. These sporadic blasts a warning of the weather ahead.

collecting lemons and oranges at the Turon River in the old Chinese garden, remnants of houses and stone-work still holding out; the Aussie flag, mashed into the mud, a crushed icon of racism; 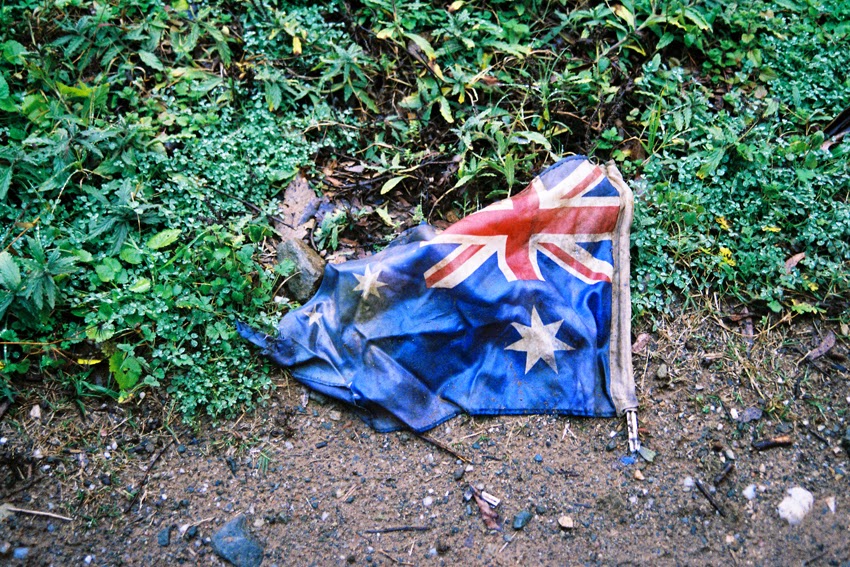 Daylight breaking, signaling 10 hours ‘til nightfall; and most of all LEA, a fabulous walker, talker, and thinker—thanks ever so for coming along in such high spirits—you are a champion. xx